You can't go anywhere without hearing about iPads...they're all the rage at conferences, in some school districts, and more. Even when I go out to eat, you see kids (and adults) playing with their iPads at the table. Now I'm not here to judge whether or not that's okay (especially since I may have been guilty of pulling mine out once or twice), but what I would like to do is share some of my favorite apps. There are apps for everything it seems, and app lists aren't hard to come by at all. Sometimes it can even be a little overwhelming because there are SO MANY great apps out there. In our district, right now it is approved for administrators to purchase iPads, and we are in the beginning stages of running an iPad Pilot for students. I can't wait to share my favorite apps for student use, but in this post I'm going to stick with top 2 apps that have been invaluable to me at work and as a doctoral student for note-taking and organization. 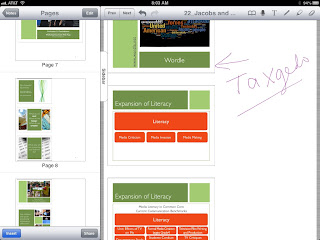 An app that I first fell in love with last year when I first purchased my iPad (thank you Uncle Sam for that tax refund!) was Noterize. It was described as a "digital note taking tool," which doesn't even begin to tell you about the magic you could make happen with this app. Unfortunately, my favorite app became unavailable for a while, but now you can grab it by it's new name- PaperPort Notes. So what's so magical about this app? Well- you can create notes, obviously. And on those notes, you can add "sticky notes" or annotate using a pen and highlighter tool. Pair this app with a stylus and it's like having that legal pad to carry around with you everywhere. But what I use it for the most is annotating over pdf files. I can import my pdf files from several services such as Dropbox and Google. I could also choose to use Paperport to open the pdf when I first open it on the iPad. Then, I can use the same sticky note, pen, or highlighter tool to annotate on that pdf. When I'm done, I can choose to share it by email, or export it out to Evernote, Google, or Dropbox. And have I mentioned that it also uses Dragon Dictation's voice recording technology so I can talk instead of text if needed? Amazing. My favorite organizational, I need to do work App. I use it to store and annotate over research articles, mark up pdf checklists when I don't have access to wireless, and more. 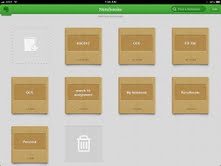 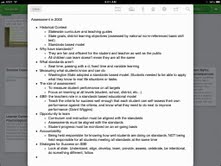 An app that is coming in to a very close 2nd place for me is Evernote. I admit that when I first tried it a couple of years ago, I was not impressed and I just didn't "get it." But a colleague recently shared some conference swag with me- and in that swag was a free premium month at Evernote. I rarely turn down free, so I of course went through the pain of remembering my login and vowed to give it another shot. Wow. That was my first thought, and my second, and my third...Before we even talk about the many features of the app, a big plus for me is that not only is the App great, but everything synchs to the Evernote website, meaning that even if I don't have my iPad with me (blasphemy!) I have access to my content. From this app, which you can see in the App Store here, I can view and create Notebooks, and then create Notes inside of those. Here's a pic of my Notebooks. On the left side, you can see a list of the notes that I have saved in this notebook. On the right, a larger preview of the Note I was looking at. Those notes with the nice bulleted list and the link you see there? All typed straight from the iPad. Oh, and that audio player you see? Did I mention that you can also record from the app as you are taking notes? Yep. Magical. And I can also add images, either using the iPad camera or from my Camera Roll directly into the Note.
Once I've created a note, if I wish to share it, Evernote will let me add specific people to the note (or Notebook) or give me a public link. Awesomeness. And honestly...the free version is just as good, you just don't have quite as big of an upload limit.

So although there are many many more apps I'd love to share, i'm going to save those for later posts as I think I've rambled enough for today!

What are your favorite note-taking or organization apps? Let me know in the comments.