So I've made some major changes in the job department in the last month, but I'll be back later to give an update on that! First, I want to share something that I think is a super cute idea.

As I was doing my morning ritual of scrolling through Pinterest before I got up this morning (that's addiction y'all), I saw a super cute idea from one of my favorite Pinners for teacher resources, Jennifer Jones. 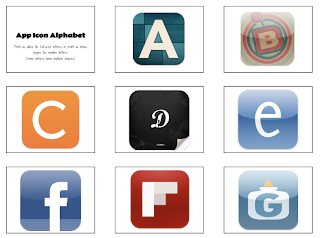 The idea was to use the App icons as headers for a Word Wall. Totally cute, right? So I repinned and tweeted the pin. After doing so, I realized that the link to icons was not to the individual icons, but to 1 image of all of them compiled. So of course, being the super geek that I am, I spent a little bit of time this afternoon finding icons and compiling them so they'd be simple for my teacher friends to print out. After a bit of searching, I was able to find all the letters...and even found multiple choices for a couple. I hope these are useful to some of you! You can see a preview of these letters to the right...but you can download the whole thing using the link below!

So what do you think- can you guess the apps these icons represent? Any changes I should make? Let me know if you have other apps that would make for better letters!
Posted by Unknown on 8/18/2012

Thanks for commenting- I appreciate comments and love feedback! Any spam, profane, or other comments I deem as inappropriate will be deleted.